So here it is, the plans for the software that I promised on New Year's Eve.
Rather than writing an emulator from scratch (something I've done a few times before, see ES40 and FreeAXP for examples) I'm going to modify an existing emulator, the Hercules System/370, ESA/390, and z/Architecture Emulator. Whew, that's a mouthful! It emulates an IBM 370 or later rather than a System/360, but as the 370 was downwards compatible, OS/360 will run on Hercules. 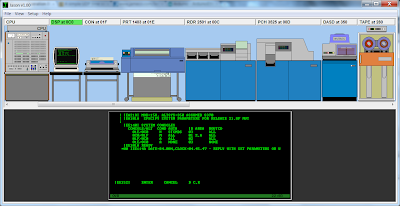 I like using Hercules with an add-on application called Jason. Jason is a graphical front-end to Hercules, that provides you with a view of the (virtual) devices attached to the emulator. It allows you to change a tape, or load a deck of cards using the mouse on the devices, rather than typing commands at the Hercules prompt. Having a Jason display running on an LCD panel next to the console panel seems to be a good way to show the rest of the 360 environment.

I'll make two modifications to Hercules. The most obvious change will be to equip Hercules with an interface to the real console panel. The more subtle change will be to replace the emulated 370 CPU with an emulated 360 model 65 CPU. The feasibility of doing this depends on my ability to find the proper documentation on the model 65's microarchitecture (see the Wiki for an overview of the microarchitecture).